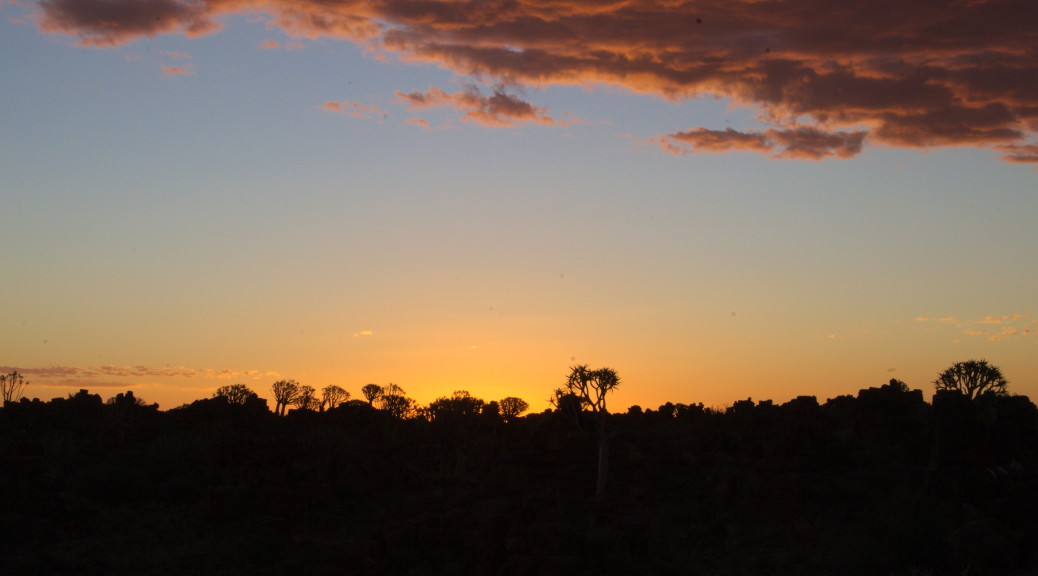 We left Swakopmund in the afternoon of February 11th and headed for Spitzkoppe, a mere 200 kilometer away and a nice startup for our renewed vehicle and crew.
The ride went smooth and after a good two and half hours we arrived at the quiet and beautiful campsite right underneath the mountain. There we slept wonderfully, back in our rooftop tent after almost six weeks.
The next day we drove a long stretch on the good Namibian tar roads, via Windhoek all the way to Keetmanshoop where we camped on the Garas (Quiver tree) Park, just before the town itself. Just after we had put up the tent the sun set leaving us a beautiful view – see the picture above this blog.

Saturday we headed for the Ariamsvlei border post where we completed our VAT refund claim with an obligatory inspection of the goods (i.e. all the parts we bought in Namibia to get our car back on the road). Although this border crossing was listed as one of the few that could handle refund claims Customs people were reluctant to cooperate, and fortunately after helping them with some arguments the Enforcement people forced their way around their bureaucratic colleagues and provided us with the required stamps and the address of their department in Windhoek that will eventually decide on our claim [to date we have not heard back anything]. Back in South Africa we used the remaining hours of daylight to drive to Upington and find us a spot on the municipal campground.

As we had decided to drive back to Jo’burg we choose our route over Kimberley and see the (‘the’ seems more appropriate here than ‘her’ 😉 “Big Hole”, one of the remains of the intensive diamant mining in the area and acclaimed to be the biggest hole made by man. This should have been an easy drive, but got a bit exciting as about 80 kilometers before reaching town the engine temperature started running away. A quick view under the car learned that the bottom radiator hose was not properly refitted and got worn through by a pulley. Well, nothing a bit of ducttape and a pair of cable ties can’t fix! And soon we were back underway, be it with only sparkling water to drink as we had to use the rest to refill the cooling system.
Checking liquid levels every 20km we made it to Kimberley were we found that the Big Hole caravan park was indeed situated right across the street from the town’s one and only attraction, but it was unattended and looked run-down. In what could be seen as a romantic strike we decided to skip camping and stay in the hotel across the street (and right next to the Hole). Really, we didn’t pay much attention to it being Valentine’s day, until during dinner I (Jasper) was asked to hold the phone of the guy at a table next to ours. Looking puzzled at the phone while it seemed to be on video and already recording I saw the guy kneeling down at his table. And then I go it: he was proposing! Afterwards he explained the restaurant at the hotel was one of the more posh in town, and therefore suitable for the location.
The next day the people at Silverton radiators couldn’t get their hands on a proper sparepart and fixed the radiator hose with a piece of pipe while we arranged for our VAT paperwork to be send to Windhoek. In the afternoon we finally went to see the Hole, which was indeed really Big and was accompanied by a museum on the history of diamants and mining in the area which happened to be really good.

Monday we drove the final stretch to Jozi. When stopping to refuel the Silverton workaround couldn’t stand the pressure built-up in the radiator resulting in the pipe snapping out of the radiator hose draining our cooling system. Relying on a bit more than just ducttape we decided to refit the pipe into the radiator hose and put the hose clamps real tight. That brought us in a similar situation as the day before, making us check fluid level and leaks every so many kilometers. Time to call in help, and head straight for Adventure Rovers! Marc had helped us out nicely before and returning to his place was a bit like coming home. He could get his hands on a proper spare radiator hose quickly and yes, he had time to fix it during our intended stay in town as well! Such a relieve when there’s experts to rely on.

In Johannesburg we stayed a couple of days in a lovely small apartment via AirBnB and ticked of our little wishlist: lunch and dinner with friends of Stephanie, enquire about visa for Mozambique and of course some shopping and sightseeing. The highlight we found the Maropeng museum and the Sterkfontein caves in the Cradle of Humankind, just north of the city. On this UNESCO heritage site at various places remains are found of what scientist believe to be the earliest ‘homoids’, the apemen that evolved into our current Homo Sapiens species. Very informative and entertaining.


With our car fixed and -as a bonus- fitted with stiffer rear coil springs we headed for Swaziland. Not far from Johannesburg we had to slow down on the motorway to pass an accident that clearly had just happened and caused another of the annual 13,000 traffic fatalities in South Africa. Apparently the victim was one the many people strolling along the highway and got caught by a passing car.

The rest of our trip was smooth sailing into Swaziland. Arriving at the campsite we immediately saw a Landcruiser with a dutch license plate. It turned out to be Nico and Joska whose blog we just found, and used for inspiration when planning the rest of our own trip. They have been travelling southern and east Africa for nine months and were slowly on their way back to Cape Town. It was really nice catching up on each others adventures and we also spend the next, drizzly, day together. The night we spend in a little reserve called Mlilwane were we enjoyed wine, snacks and more stories around the fire.

Driving into Mozambique from Kosi bay border post proved a nice litte adventure: 10km of sand roads without signposting. Guided by our GPS we arrived into the little village of Ponta do Ouro about three quarters of an hour later, and then found our way to the lodge where we camped following the signs.

In Ponta we enjoyed the lovely beach and went diving to one of the many reefs in the sea in front of the village. We also spent some evenings with Penny and Brian, 2 lovely South Africans (thx for the chats and the wine!)

Unfortunately our second dive was cancelled due to bad weather, so we decided to move further and conquered the 120km of muddy dirt roads to Maputo. Just above town we camped at Jay’s Beach Lodge, beautifully located next to Indian Ocean.

The day after the accident- Twyfelfontein

We spent one more day at Twyfelfontein Lodge (close to Kipwe, which was unfortunately fully booked) since our car was going to be towed away on monday and it was sunday. The towing trip was an adventure on its own! Stephanie had spent the whole morning from 9.00h to 13.00h at the ‘nearby’ police office (60km) to get the police report. First they didn’t want to write the report since she wasn’t Jasper. Then the police officer didn’t write down all the details when he came to visit us, so Stephanie had to contact Jasper which wasn’t possible since it was a remote location. Eventually she got hold of him via the satellite telephone and could ask for the details. Then the copy machine was broken and they wanted us to drive another 100km to the nearest police station. We managed to drive to Palmwag Lodge, ‘only’  about 40km on dirt road. At 14.00h Stephanie had arrived and the towing car was able to drive to Swakopmund. The roads were in such a bad condition that the driver had decided to drive via the north (Torra Bay). This what you call a detour! After the 2nd flat tire (and only one spare tire with him!) we understood why he wanted to get rid from this part of Namibia. We arrived at 22.00 in Swakopmund although we had a good time with the friendly driver and again a flat tire…..

Again a warm welcome and a helping hand from Jeroen and Roos. Jeroen had booked us a hotel and the next day Roos picked us up to make a plan for the car and look for a self catered apartment.  That morning they called a mechanic to check on our car and we were a bit afraid of the verdict, as the car looked seriously damaged. He told us it could be fixed, joehoe! Now we had to wait for parts to be found: a ‘new’ roof, 2 doors, a windscreen, a new diff, a new prob shaft, new springs. Especially the mechanical parts took a while to arrive, but after 2 weeks they could start fixing the rear axe and springs. This seemed to be the ‘easy’ part. From there the car was driven (!) to another garage to have the body parts done. We even saw our own car on its way to the other garage: yes the Landy is driving again! Now this turned out to be the difficult part in terms of time and patience…. It took this garage about 2,5 weeks to have the car fixed and the last week Jasper has helped them to rebuild the car after the spraying. Lean management, structuring and efficiency aren’t in the dictionary here……

Meanwhile we were visiting every lunch cafe and bar in Swakop, checking them on good food and wifi and reading books and watching films. Roos and Jeroen offered us to stay at their place and we were also offered to temporarily use one of their cars. We really appreciated those gestures! Though 5 weeks in Swakop is quite long and sometimes a bit boring, we do like the fact that we got to know Roos and Jeroen and have a great time with them.

While writing this blog I (Stephanie) see Jeroen and Jasper together working on the LaRo to rebuild it into our car again! Hopefully we can continue our trip on feb 11th.